GOD LET IT HAPPENS FOR A PURPOSE 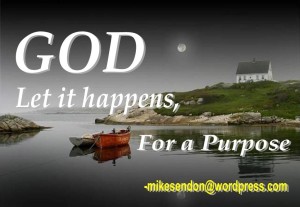 Rejoice always. Pray without ceasing; in everything give thanks; for this is the will of God for you in Christ Jesus.

We may be passing and experiencing right now a lot of troubles, testing, trials, persecutions, difficulties, hardships, family problems, loss, and so on…. and the big question on our heads is” How I can say thank you, Lord?”

Are all these experiences I have today and in the past God’s will for me?

But let me tell you that God allows things to happen for a purpose.

The story of Joseph

Joseph is loved by his father Jacob more than all his sons. His brothers saw that their father loved him so much more than all of his sons so they hated him.

His brothers plotted against him to put him to death and later on sold him to an Ishmaelite’s traders for twenty shekels of silver.

The traders brought Joseph to Egypt and sold him to the captain of Pharaoh’s bodyguard whose name was Potiphar.

In Egypt, Joseph found favor in the sight; he became a personal servant and overseer of Potiphar’s house and all he owns.

It did not last long when Potiphar’s wife desires Joseph.  But he refused to lie with her.

He was imprisoned when he was accused by his master’s wife that he had an evil intention for her.

He was put into jail where the king’s prisoners were confined.

But the Lord was with Joseph and extended kindness to him, and gave him favor in the sight of the chief jailer.

Joseph became charged with all the prisoners who were in jail and the chief jailer did not supervise anything because whatever Joseph did, the Lord made to prosper.

Is it a Coincidence?

From being a servant, he became a master.

From being a prisoner, he became a free man.

From being a slave, Joseph rose above and became one of the greatest leaders in Egypt.

Is it a coincidence that Joseph was sold by his brothers to be a slave of Potiphar?

When he was accused falsely so that he could be imprisoned among the King’s prisoners?

When he was appointed ruler of Egypt so that he could save his family during the long years of famine?

For some, it may be a coincidence. But there is no coincidence in God.

God let it happens for a purpose.

God is at Work

Maybe you have to experience the same things.

Maybe we blame God for all the uncertain events in our lives.

He works in ways sometimes we cannot understand.

He does things we cannot accept.

God is always at work and He allows things to happen for a good purpose.

Why did God Let it Happens?

To Bring out The Best in Us

Consider it all joy my brother when you encounter various trials, knowing that the testing of your faith produces endurance

God is at work with our character.

We let various trials pass according as God is working out something for us.

This encounter shall not break us but rather make us.

To allow Him, He molds us into a wonderful creature that is according to His image and likeness.

Like gold to be refined and brings out the best it could, should be tested on fire.

Before he reached his prominence, he passed through that rigid test to equip him to be the fitting leader he became.

We passed the same testing so that we could be equipped with our endurance.

Endurance that no matter how many rejections and hurdles we face in life, we will never give up but rather move forward till our dreams come to reality.

We will never be tired to reach our aspirations.

We will continue to hope for what we hoped for.

We Filipinos, despite dozens of storms and calamities that come in the Philippines, continue to rise above the edge.

No Yolanda could break our spirit.

Obedient to God’s will

Let things happen. Do not complain.

Instead of grumbling and murmuring, we let things pass with belief and trust that God knows what is best for us.

Abraham when God instructed him to leave his country never complains that he was too old to travel.

He did not doubt where God will lead his family to go.

To Test Our Faith

In times when we encounter uncertain events in our life, it is an opportunity to exercise our faith.

Only after 15 days after they departed from Egypt, the whole congregation grumbles against Moses and Aaron.

The Lord said to Moses, Behold, I will rain bread from heaven for you; and the people shall go out and gather a day’s portion every day, that I may test whether or not they will walk in my instruction.- Exodus 16:1-4

To have that strong and hump muscle, we need to work it out. We need to exercise.

Uncertain events are instruments so that we could find our faith to work out.

He is the God of possibilities when we learn to trust Him amid difficulties.

God wants us to see what He sees and see things differently.

What happened during those 15 days was forgotten by the people of God. He divided the sea.

If God divided the sea, how much more He cannot provide the bread and water they need.

Never waiver on Our Faith

Then Peter got down out of the boat, walked on the water, and came toward Jesus. But when he saw the wind, he was afraid and, beginning to sink, cried out, “Lord, save me!” Immediately Jesus reached out his hand and caught him.-Mt. 14:22-33

Like Peter, God wanted us to walk on the water. He desired that we may overcome all the difficulties in our life, be prosperous in so many things, successful in our careers, happy in our marriages, and so on.

We started to sink when our focus depart from Jesus. When the thought that the wind and storm are stronger than the God we serve. When we magnify the problems it becomes bigger than our God.

He allowed us to sink so that we realize that we need help. That we can comprehend we can do anything without Him.

3. To Use  Our Power and Authority

All of us are given the power to overcome.

I can do all things through Christ who strengthens me- Phil 4:13

Like David, he used what he had to fight Goliath. He had only five pieces of shiny stone, a sling, and big faith in God.

What is the Goliath you’re facing right now?

Think of things we have right now. Unleash the giant within us because God has given us much that we can use to be an overcomer.

Operate in the areas of our giftedness and we will taste success in our endeavors.

With all of these combined with faith, we will triumph over whatever goliath we are facing right now.

4. To Remind us that God is Always In Control

It was not a coincidence that Ruth gleans on the land of Boaz.

When Orpah left Naomi, she let her go.

When our job was removed from us. Let it go.

When your loved ones left you. Let them go

When our family members pass away. Let it go.

Our life will go on for our destiny does not depend on people but on God.

Our destiny is with God and He is always in control.

Maybe we are gleaning right now on land we don’t own, for now, the time will come we will be the landowner.

Maybe your boyfriend left you, don’t worry as God is in control.

You may be in a financial struggle by now, do not fear as God is in control.

You cannot judge your future by your past.

TD Jakes said that we cannot judge people’s destinies by their history.

God turns the Table for Good

Joseph and Ruth’s story is a story of inspiration.

Their story could be our story.

It does not mean that when there are bad chapters in a book, it has a bad ending.

Joseph became the adopted son of Pharaoh and the lord of all Pharaoh’s household and ruler of all of Egypt.

Ruth the gleaners became the landowner. She became the grandmother of King David.

God always turns the table for our good.

In all things, God works for good for those who love Him.

God Let it Happens for His Own Purpose

In Genesis 50:20 “ As for you, you meant evil against me, but God meant it good to bring about this present result to preserve the people alive.

In every circumstance happening in our life, nothing just happens.

It happens for a purpose.

When there is no way, God will make way.

May your happiness be full,